Merging to Advance the Needs of People with Disabilities

It used to be that people with disabilities had to accept whatever services were available from any provider. Not any longer. Landmark law suits against the State of Illinois have given more choice to individuals and their loved ones for where to live and access services. This is the story of what two nonprofits did using a merger strategy to adapt to the changing needs of the people they serve.

United Cerebral Palsy of Greater Chicago (UCP) with annual revenues of $8M and Seguin Services of Cicero, Illinois, with annual revenues of $26M were separate autonomous organizations in 2013, were addressing the needs of children and adults with physical and intellectual and other developmental disabilities including providing housing, job training and placement, foster care services for children, and specialized assistive technology and accessibility services. Each had the goal of advancing independence and allowing people to act as full members of the community.

In 2013 two events occurred to launch a merger discussion. Long-time CEO of UCP Paul Dulle announced he would retire in 2014. Second, the State of Illinois was finally launching the Long-term care re-balancing initiatives, movement of individuals to less restrictive environments, radical structural reforms to put clients in control of their funding. This would require the human service system to change how services would be provided to clients and their families.

These two organizations had very different benefits packages for their employees around healthcare, retirement, holidays, and paid time off which had to be sorted out.

But the biggest issue the two organizations negotiated was in relation to $15M in unrestricted net assets that UCP would bring to the consolidated organization. The UCP board was concerned that these resources be stewarded properly. This issue was resolved by agreeing to place a percentage of the UCP net assets into a new foundation which would be overseen by an equal number of board members from both nonprofits, and managed by Paul Dulle, the departing CEO of UCP.

The merger was achieved in a two-step process. The first step was to create a Parent/Subsidiary agreement which was followed a few months later by a legal merger which dissolved UCP and moved its assets and liabilities over to UCP Seguin.

Over the three years since the merger closed, there has been a substantial increase in the number of people served.

The ultimate purpose of any formal or informal consolidation is to secure and expand the services provided to those being cared for. This merger has accomplished both mission expansion and is securing the financial viability of both organizations as we confront the future of Federal and State funding challenges.
—John Voit, CEO UCP Seguin 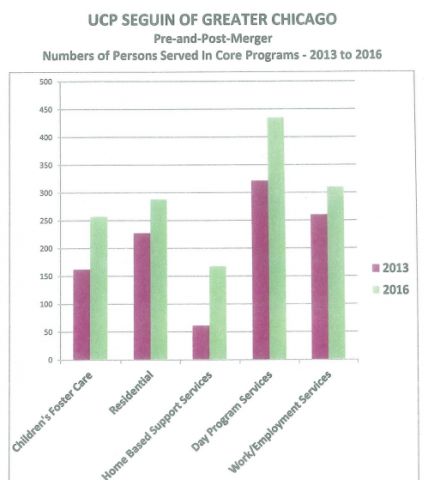